This month's meeting features Jan McGoey, a hand quilter, as our guest speaker. Jan will be presenting her trunk show “The Scenic View—My Quilting Journey So Far”.

March Block of the Month: the Inukshuk


The block of the month for March focuses on the Inukshuk, using a simple applique of the shapes often found in these formations.

The word “Inukshuk” in Inuit means “in the likeness of a human.” These statues are found all over the arctic regions of the world, and were originally used to indicate that the person viewing the stones was on the right path, or was in a place where others had been. Traditional Inuit tradition held that these markers were never to be disassembled or destroyed, as their installation in Polar Regions had great value to others as a navigation tool.

The symbol today is used in a variety of ways and it’s common to see Inukshuks erected by non-Inuit people to mark peaks of mountains, or just to leave as a remembrance of an event or people. For the 2010 Olympics, Vancouver used the Inukshuk as a symbol to pay tribute to the Inuit people and to reflect Canada’s embrace of our Indigenous heritage. In modern symbolism, the Inukshuk represents a positive message of welcome and friendship.

How to Make the Block

This month’s block is made using an applique technique of your choice.

You’ll notice the “rocks” that make up the Inukshuk on the next page have no seam allowance, which is ideal for fusing using fusible web (such as Steam a Seam or Wonder Under) and then securing to a background using raw edge or a satin-finish.

A traditional-looking Inukshuk would be constructed using stone, so consider using grey or black for your applique. Or have fun with it and use a bright for a modern take on the symbol.

If you are using an applique method such as needle turn applique, you will need to add an appropriate seam allowance to each “rock” as you cut it out. 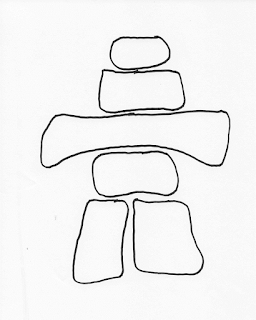 Posted by Yorkshire Rose Quilters Guild at 22:59 No comments:

Elizabeth shared cozy baby bunting bags that she has made for new baby's in her life: 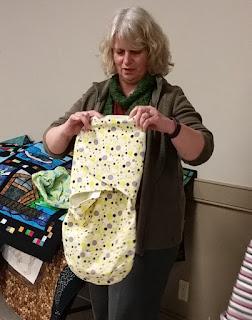 Klara made this great I Spy quilt which could be given to a young child to build their observational skills or a university student for a great drinking game! 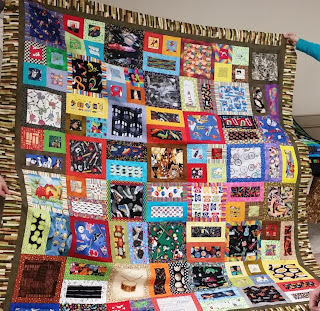 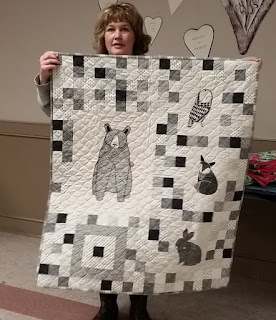 And Sherri was busy this month and also shared her Amy Butler string quilt: 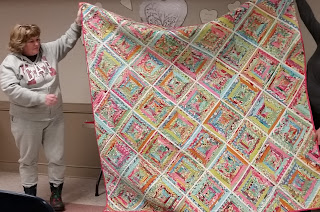 Posted by Yorkshire Rose Quilters Guild at 22:45 No comments: